Of Currencies and Concepts

It’s hard for expats to resist comparing our home country with our current home. Sometimes events conspire to make that impossible.

The U.S. has just announced that the new $20 bill will replace 19th century president and slave owner Andrew Jackson (in office 1829 - 1837) with escaped slave, abolitionist and Civil War spy Harriet Tubman (1822 - 1913). She will be the first woman, the first black person and the first non-President to appear on the front of a U.S. monetary note (except for the brief appearance of Martha Washington in the 19th century). Other great American women will soon be ensconced on the back of other U.S. bills.

Bravo U.S.A. But gosh, if only we had an image of dear Harriet that is less, uh, glum.

Though goodness knows she had plenty to be glum about.

If she were alive today she might even be glum about the old-fashion design of her new $20 bill. It will look like every other U.S. dollar bill has looked for many years now, drab blue and green, with few sophisticated safeguards against counterfeiting. It will also still have on it the laughably unconstitutional statement, “In God We Trust.”

Coincidentally, my new home country of Switzerland is also unfolding a new monetary note, the first of a full series to come. The design is the exact opposite of the U.S. approach. 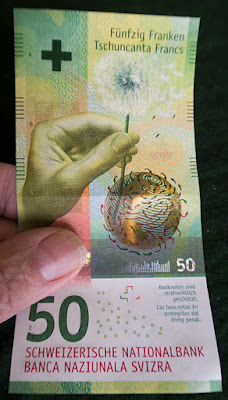 The recently released 50-franc note doesn’t have anyone’s face on it at all. Until now, the currency notes in circulation have featured, not dead presidents as is mostly the habit in the U.S., but an architect (Le Corbusier), a composer (Arthur Honegger), artists (Sophie Taeuber-Arp and Alberto Giocometti), a writer (Charles-Ferdinand Ramuz), and a historian (JacobBurckardt). The new 50-franc note is a colorful collage featuring not a personage, but a theme: wind. There are images of mountains, a paraglider, dandelion seeds being blown by a breeze and our planet covered with arrows indicating wind directions – innovative yet still in that lithographic style that says money. Also intriguing to graphic design nerds: the designs for both sides are vertical, not the horizontal normally seen on paper currency. The beautiful note, suitable for framing if only you didn’t need the whole thing to pay for the kilogram of scallops you just bought, also includes many sophisticated safeguards against counterfeiting, which I could disclose, but then I’d have to …. However, I can reveal one thing: The note is heavy, made from layers of materials that might even possibly include an embedded interactive holographic disclaimer against formerly vaunted Swiss banking secrecy guarantees now null and void. Nevertheless, the note feels as solid as the swiss franc itself.

But it’s only money.