You might expect Swiss innovation to be all about hi-tech. Not so. On our local train line, just before and after a couple tunnels, observant passengers who don't blink at the wrong second will see four horizontal brooms in a vertical row on a pole at window level. 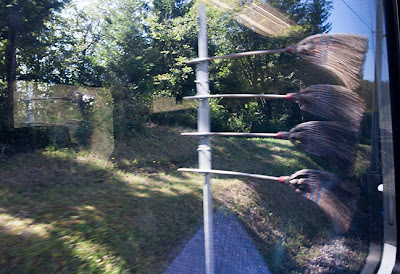 The Swiss obsession with cleanliness is well-known, but ... really?

I asked the agent in the Neuchâtel train station about the brooms, and he said he had no idea.

So Maïf and I went to the source. At our village train stop one morning we saw the man who's often there to catch the same train. Weeks before, during their morning bonjours, he had told Maïf that he works for CFF/SBB/FFS. This morning, when she asked if he knew about the brooms, he sheepishly confessed that he and his team had put them up more than 10 years ago.

Back then, train windows could be opened wide enough for people to stick their heads out like slobber-blissed dogs. Alas, the old stone tunnels between some local train stops are dangerously narrow. CFF knew instinctually that headless passengers were bad for business. So monsieur and his team, with almost no budget, took it upon themselves to set up a safety device to warn passengers.