Probably not among your reasons for going to Bella Italia is to admire Fascist architecture. But travel is all about expanding our horizons, right?

It's officially called "Rationalist" architecture. The city of Forli, in the heart of Emilia-Romagna, boasts some of the finest examples of the muscular buildings from the 1920s and 30s that were designed by various Italian architects to reflect the Fascist philosophy of Order and Control -- including the tower (below) in a youth activities center where a statue of Benito Mussolini's brother once stood.

No surprise, since Benny's hometown of Predappio is just up the road. In the museum there I was shocked to learn that Il Duce went to university in Switzerland. Apparently, our live-and-let-live principles failed to rub off on him. (More about Predappio in my next post.)

The exterior of the tower is inscribed with an oath that children were suppose to recite, promising to execute Il Duce's orders with all their strength, and "if necessary, with my blood for the Fascist Revolution." Makes you wonder what happened to any kids who dishonored Fascism by flunking their math test.

And Big Brother was definitely watching on the façade of the elementary school across the street. 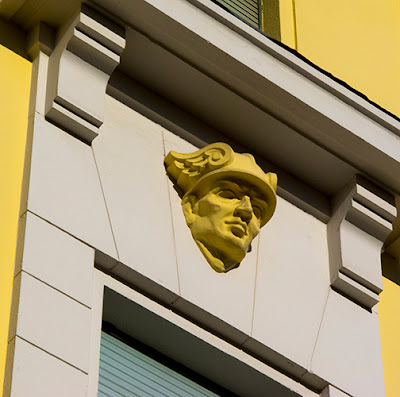 Other buildings of the Fascist years are decidedly less ominous, but no less imposing. 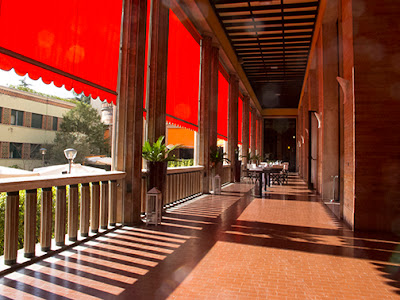 The Grand Hotel in Castrocaro, just a short drive from Forli, is indeed Grand with a capital G. Not so much because of its thermal baths and spa, nor even because Il Duce had an office suite here, but because of its extraordinary interiors.

The interior design was created largely by Tito Chini, an artistic genius ...

... especially with ceramic tiles used everywhere in the hotel, including on walls lit by etched glass ceilings. 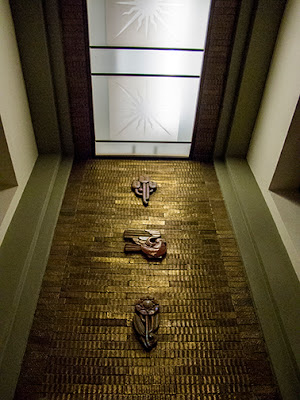 If a Fascist architecture vacation around Forli and Emilia-Romagna, sounds fun for you and your family,   you'll want to learn more from ATRIUM (Architecture of Totalitarian Regimes in Urban Management), an international organization devoted to preserving the Rationalist movement, not only in Italy, but also Greece and the Balkan states. Also see the excellent detailed info and superb photos at Anita's Feast.

And if you want to see why latter-day Fascists are still making pilgrimage to Benito's hometown of Predappio, stay tuned to the next ExpatCH.