The charming, beleaguered mayor of Predappio, Giorgio Frassineti, says he receives emails every day, not only from his town's constituents, but from people far and wide around Italy and the world. And every email, every email, he insists, is negative.

People with political leanings to the far right tell him he's not doing enough to promote tourism in Predappio. People who lean to the left say he's doing too much.

His unenviable task: "to work to recognize Predappio's place in history -- not to glorify, but not to forget."

Frassineti couldn't forget even if he wanted to that this is where Italian dictator Benito Mussolini was born. It's also Mayor Frassineti's hometown. Both his mother and Mussolini's were teachers here.

He smiles and shrugs at these similarities between his life and the infamous dictator whose ghost follows him everywhere. "If I didn't have a sardonic point of view, I couldn't do this," says the mayor, who was a geology professor before taking office.

Signore Frassineti is fielding questions from our small group of international travel bloggers whom he has invited to walk the town with him. Soon we come to Mussolini's boyhood home, now a museum. 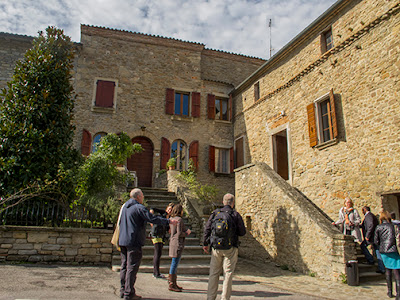 It's here I learn of Mussolini's Swiss connection: He emigrated to Switzerland to avoid military service, worked as a stonemason in Geneva, Fribourg and Bern, was eventually deported twice for socialist activism and falsifying his papers, later returning to study at the Université de Lausanne. (After coming to power, he would lay claim to Ticino as part of his imagined empire.)

If Mayor Frassineti could simply speak of Mussolini as history, he wouldn't be receiving all those nasty emails. Alas, this is not the case, as we see at the all-things-Il-Duce souvenir shop on Predappio's main street. Before a few of us enter, the mayor, who says he's powerless to close the shop, quietly leaves our group.


The son of the owner of this shop says some customers are merely tourists, but many are true believers like himself.

And yes, to the mayor's chagrin, those true believers flock to his town. For them, Predappio is "like the Bethlehem of Italy," he says. "Macho fascism is still an open wound for this country."

We soon see that all too clearly. Rejoining our group, the mayor hosts us to lunch at a superb little enoteca (wine restaurant), La Vëcia Cantêna d'la Prè. After a tour of the historic wine cellars, we gather around a long table, joined by the Mayor's wife and son. It's good the table is long, because the bruschetta that begins our meal is more than a meter long -- and twice as delicious.

In the restaurant's large dining room next to us, a large boisterous group is having lunch. A few times they erupt into chants of "Duce! Duce! Duce, mi luce! (The leader, my light!)" Clearly, they are true believers, obviously in Predappio on a pilgrimage.

Why is there this continued admiration for Mussolini? "Because Italian politics is a mess," says Frassineti. "Young people ask, 'Why do politicians steal? Why am I jobless? Why can't I get a mortgage? Why doesn't this country have any dignity anymore?' " He says "the young people ask the right questions, but don't necessarily see the best answers. Now they see that time [Mussolini's era] as a Golden Age."


Asked if he could say one thing to Mussolini, what would it be, the mayor responds quickly, and with his well-practiced sardonic smile. He'd tell Il Duce that he "was a fool, a madman, a megalomaniac."

Finally, after a day during which he doesn't once mention Silvio Berlusconi by name, Mayor Frasseneti says that, "If you want to understand Italy you must understand Predappio." Adding only, "I love Predappio. I was born in Predappio. Predappio es mon amore."
at 2:21 PM