Swiss Spring on the Wing

Yesterday, our neighborhood farmer celebrated the first day of spring by plowing the field in front of our little house. An unexpected exciting result of this was a golden eagle doing low fly-bys over the freshly turned dirt until ... swoop, scoop and I think it was mouse tartare for lunch.

I'm no bird nerd, but I love our feathered friends. No doubt it has to do with my fetish for flying, but that's a subject best left between my therapist and me. After so many years among the tropical birds of Hawai‘i, moving to Switzerland has opened a whole new ornitho-world to me. 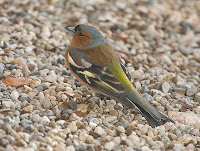 So I bought myself a bible: Birds of Europe by Lars Svensson. This handsome, handy volume is full of info and color photos.

The wife and I wanted the birds to come closer so we hung one of those balls of fat and seed on a forsythia branch right outside the kitchen window. In no time the tits and thrushes were taking turns pecking away at the goodies. When that was gone, I replaced it with another, but the next day the whole thing was gone. I'm pretty sure I hung it too low and that Nala, the big St. Bernard from down the road, got hold of it. She's not even a bird dog, but we love her, so who cares.

We've also got falcons, owls, finches, starlings, enough blackbirds to be baked in a pie, and a bunch of others I haven't identified yet. During summer the owls' long plaintive nightime hooooooooot sounds just like the train whistle from down the road. I wonder which is imitating the other.

The neighborhood's most in-your-face bird is the big black crow. Maïf hates them for good reason. The aggressive invaders chase away the little songbirds and lurk along the phone lines like fascist storm troopers. But I can't help having a grudging affection for these big boys bouncing along on the ground or perched in the treetop, always with something to say. Of course, the first time I see one ripping the entrails from a sweet little thrush everything will change.

There's one other bird in the skies over here that's even more aggressive than the crow. It's the F-16 fighter plane flown by the Swiss Air Force. This American-made jet is monikered the "Eagle," and it often flies almost as low at that mouse-munching eagle I saw, but with considerably more noise. May the gods of political correctness help me, but I do love these birds too. However, again, that's a subject best left between my therapist and me.
at 1:49 PM