It's the little things.

Cultural differences between Switzerland and the U.S. can be huge, of course -- can you imagine a U.S. political party called "The Evangelical People's Party?" The Swiss have one, and it actually holds seats on the National Council. (Eat your heart out, Pat Robertson.)

But what really shows the differences between life in the New World and Europe is the little things. Like bread crumbs. Or, more precisely, where those bread crumbs are. Because in Switzerland, as in France and no doubt other European countries I have yet to crumble bread in, diners put their bread right on the table, even at formal meals.

Consider the wonderful Easter feast I enjoyed with my new Swiss and French family last weekend. We were in the dining room at my darling mother-in-law's house, 8 or 9 of us, though I forgot to count the exact number of people or bottles of excellent Chateauneuf-du-Pape served by my father-in-law (pictured below with my belle-mère at another fine lunch at their home), who is French, and is my new best friend thanks to our mutual love of French  Old World  fine wine, even though we mostly can't understand each other because he speaks no English (or chooses to speak no English), and my French sounds like I'm channeling Pepé Le Pew. 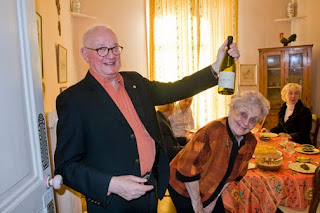 Anyway, the dining room was gorgeous, bathed in golden afternoon light reflected off Lac Neuchatel, coming through the twin spires of the 13th century church which is part of the chateau that gave the town its name ("Neuchatel" means "New Castle" in Old French). The grand armoire commanding one end of the room was probably older than my country. As we came to table, the ancient floor creaked with that satisfying sound that echoes the ages, and brings to mind buckled shoes, ruffles and ceremonial swords (one of which was hanging just outside the doorway) -- fashions somewhat different from the designer-torn blue jeans and logo t-shirts worn by the 20-something young men at the table.

None of which has much to do with bread crumbs, so let me refocus. With the first course of paté, everyone took a piece of baguette from the baskets that were passed around. They tore off a little, then put the rest ... you guessed it, right on the table. Except me, of course. Because I consider myself relatively civilized, even though my wife's favorite pet name for me is "Caveman."

But it turns out that over here, civilized people put their bread right on the table, not on the plate. This is not because, as is normally the case in America, your plate is already piled to the ceiling with super-sized slabs of beef and french fries, but because ... well, who the hell knows? Maybe it's because adding bread plates to the table would crowd the wine goblets. Maybe it's left over from the Middle Ages when little pewter plates were piled high with giant slabs of beef and French fries.

In any case, I tried to copy everyone else and put my bread on the table. But for this Hawai'i boy who is still trying to get used to wearing shoes in the house, this was a strain. So I just ate all my bread at once without putting it down.

Another bread-related cultural difference: When a Swiss person finishes their meal, their plate is normally as clean as before they were served. Most Americans would think the Swiss person had surreptitiously slipped their plate under the table, where the dog had his way with it. But no. Let's just say that bread is the unheralded utility utensil of European cuisine. In any case, it clearly saves a lot of dishwashing elbow grease.
at 4:06 PM