Sorry, but I've got to revisit the smiling issue. Some of you may have read an earlier post in which I described the supposed differences in smiling behaviors between the USA and CH. In short: theoretically, Americans grin like crazy with little or no provocation, but the Swiss view frivolous smiling as a possible sign of idiocy.

Well, after two weeks of intensive research, I'm here to tell you that the Swiss are as profligate grinners as any don't-worry-be-happy American. At least that's true here in Swiss-Romande (French-speaking CH), and especially in my newly adopted town of Neuchatel and the surrounding villages where I shop and otherwise have occasion to observe grins or the lack therof.

Here's Bill ordering a take-out tuna sandwich in a patisserie, mispronouncing "thon" (tuna) so it sounds like "ton" (as in "dumb as a ton of bricks"), the sweet woman behind the counter, gently correcting him, adding a motherly smile, reacting to his chagrin with "pas de probleme, monsieur," said with an even more sympathetic smile.

Now here's Bill riding with his carpenter/neighbor André to pick up slabs of wood for desks and shelves. André wears a beautifully scuffed leather jacket with "Harley-Davidson" across the back, and he's got the bike to back it up. Sure, he smiles at me as we trade stories of our adventures in faraway places (he's bicycled through Italy, Syria and beyond), but in the home-improvement emporium, he and other locals he knows beam at each other in greeting like freshly minted angels at a beatification fest.

This is important evidence for my research: even among themselves, the French-Swiss freely give away grins. 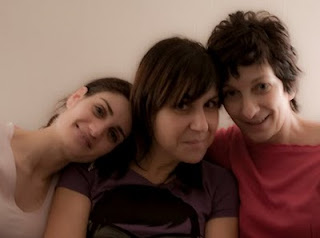 Is this also true in the German-speaking and Italian-speaking parts of Switzerland/Suisse/Schweiz/Svizzera? Further research is clearly called for.
at 11:22 AM