Yesterday I began a new ritual here in the forest by our home. Once a week for at least the next year, I'll return to the sublime spot I found yesterday and take a photo of this scene. 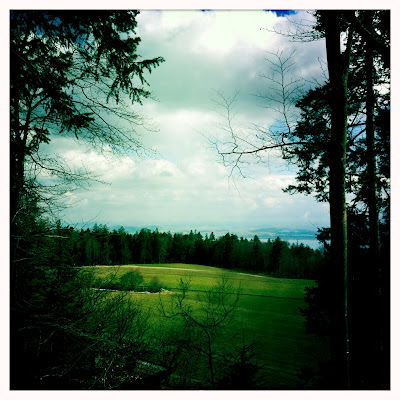 My goal is not just to record the same scene through the seasons, though that will be an interesting document in itself, but mainly to use the 20-minute walk through the woods and the minutes seated on the shelf of rock as a meditation, a way to rinse away all the white noise and chatter, and simply Be Here Now.

The irony is that I'll also be writing about my experience, and sharing the photos for a magazine in Australia.
Yesterday, I was accompanied by my intrepid friend in Zen, Loki the Magnificent. Loki occasionally goes on short hikes with us in the forest. He hates to be left behind, and mostly loves the adventure, but always seems to wonder if this trip is really necessary, especially after watching a deer come bounding out of the underbrush. Yesterday a hare twice his size suddenly appeared hopping across a last vestige of snow in a shaded clearing. Loki was clearly alarmed.

But alarm is antithetical to our mission here at our new-found sweetspot. We'll try to learn that together in the coming weeks and months.
at 12:03 PM