In Hawai‘i, where I lived for 30 odd years, the seasons move at glacial speed. So it’s quite a change here in Switzerland, where we can feel the seasons changing week by week.
I’ve been here 14 months so am seeing my second spring. As I write this, I’m sitting outside under our apple tree. The cowbells are clanging, it’s late afternoon and the setting sun is pulling the shadow of the apple tree onto the field of green young barley. Just six weeks ago the field was dirt and the apple tree was bare. Then the first tiny brave buds appeared and a week later its infant leaves began to spread. Then, overnight, the fragile white flowers appeared, and when a hailstorm hit, pummeling everything with peanut-size nuggets (they stung when they peppered your noggin), we feared we’d lose this year’s fruit.
Just after that we planted our vegetable garden. Maïf has her flowers too, but I say if you can’t eat it, it don’t get none of our precious water during this droughty summer.
We mark the seasons partly by what Pierrot, our neighbor farmer is doing – tilling, clearing rocks, scattering manure, tilling again, planting, fertilizing, tending the cows, harvesting, planting a second crop of grass for winter silage, mowing, tilling, repairing the machinery during winter, on and on. And each year, Swiss farmers make a little less money. Last year the national average was about US$58,000. Nevertheless, Pierrot looks happy.
In a month the summer solstice will mark our march back toward winter. The flowers will shrink, the tomatoes will stop coming, then the roses. The leaves on our grape vine will go red and the forest will paint itself with luminous reds and yellows. The cows and lambs will be shipped off for slaughter. One morning we’ll wake up and all will be blanketed with snow. We’ll walk in the woods, surprising a deer or fox, crunching through the snow and ice and fallen leaves, helping it turn into next year’s earth.
But for now, I can see we’re going to have apples this year. 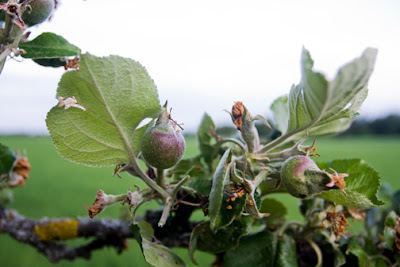