I See Annecy. Or ... Lunch with the Frenchies

We went to France for lunch last weekend. Gosh I love the sound of that. Even after a year in Europe I'm still amazed how easy it is to do that.

Sophie, my French "sister" came to our house with her boyfriend Olivier and her godparents Mauricette and Francis. Maïf made a delicious lunch and, then we all strolled through our exquisite forest, now full with luminous pale-green early-summer foliage. 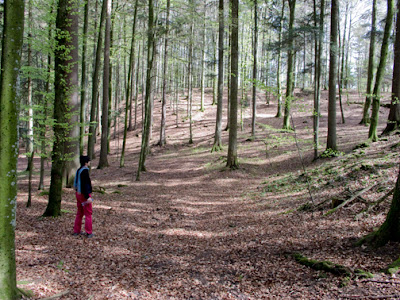 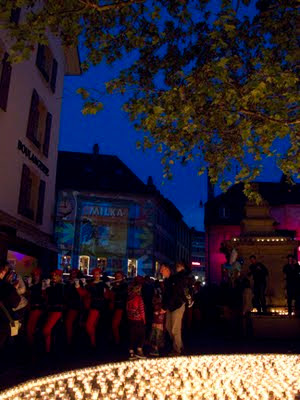 Then Mauricette and Francis drove back to their home in Annecy, France, and we two couples went into Neuchâtel for the evening along with about 10 million other folks to join the first fete celebrating our town's 1000th anniversary.

The next day we hopped in our little Huyndai and drove a couple hours to Annecy to spend the day and night with Francis and Mauricette before Sophie and Olivier would return the following day to Paris, and Maïf and I to Neuchâtel.

But first came an amazing lunch chez Francis and Mauricette. Sophie had always told me I'd love Francis, not least because of his wine cellar. Yes, it's a wonderful cave but Francis is the true treasure. I swear to you, this lovely man actually, truly, really has a twinkle in his eye. 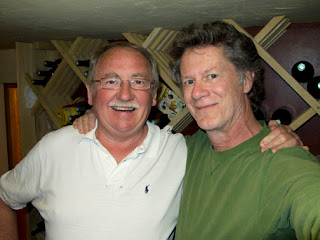 Lunch lasted 3 hours, 5 cheeses and 6 wines, but who was counting? Also nuts, terrine, haricot vert, flageolet, potatoes, turkey, tarts, candies, ice cream, coffee, eau de vie. The wines began with Champagne, then a white and rosé from French sub-regions I'd never heard of, then two rich, old rust-colored Bordeaux, then port. And all the while, stories flying, songs being sung. 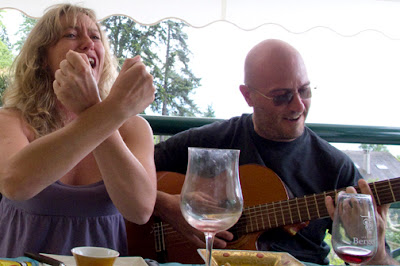 While sipping highly combustible prune eau de vie, we sang songs to Olivier's guitar accompaniment, then, suddenly, somehow, we were all in cars driving into Annecy to stroll by the lake and through the medieval town center before -- ack! -- another meal!

We were joined at a traditional restaurant by Thierry and Philippe, the two sons of Francis and Mauricette, and Thierry's girlfriend and two kids. I had a delicious bouillabaisse-style fish stew. Bottles of Bordeaux circled the table. 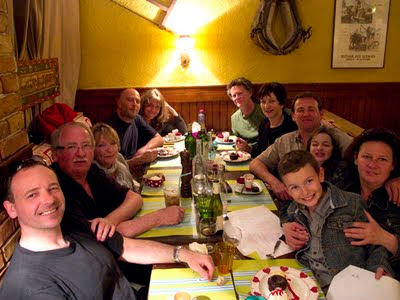