Yesterday I met my first real live shepherd. No, not one of those "shepherd of men," or some such poetical poop. This guy is a shepherd of actual sheep, about 400 of the fuzzy little fellers -- 1600 legs, he points out. 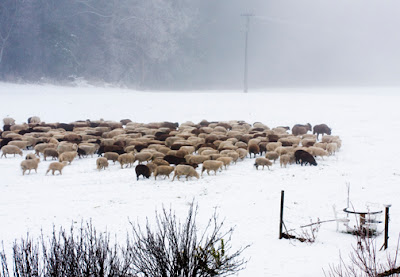 There are also two donkeys, who carry gear and tend to lead the flock when they're grazing. If the donkeys suddenly light off in a particular direction, the sheep quickly follow with great enthusiasm.

The sheep had first appeared several foggy mornings earlier. First, the clanging of their bells. Then, around the curve on our narrow country lane, all the shaggy vanilla and chocolate-brown shapes pawing at the snow. I figured they'd escaped from a Benetton commercial, but no.

The next day, when the wife and I drove very slowly past the few who'd wandered onto the road, we heard a voice from within the mist. One word: Va! (Go!) Fortunately, this disembodied voice wasn't talking to us, though we were immediately inclined to obey, especially when we finally saw the dark, cloaked figure at the edge of eyesight.

An instant later we saw who the shepherd had commanded, a black and white border collie, running low and fast, kicking up the snow. The sheep sensed him coming and lunged in the other direction. The speedy little dog spread a wake of power before and behind him, and the sheep gave way in an exquisite display of wave dynamics. 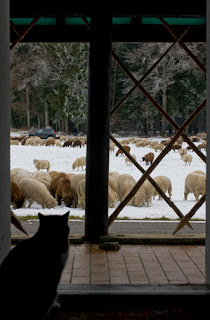 The next day the flock spent the day in front of our house, much to the consternation of our cat Loki, who probably thought he was being invaded by an army of giant hairballs. All day long the sheep ambled about, corralled now and then by the wonder dog. They always kept pawing at the snow to get at the crispy salad beneath, thereby producing plenty of the non-poetical kind of poop, leaving the little black pellets strewn across the field like ellipses ... which is kind of poetical afterall.

The mysterious shepherd in his long dark cloak made a fire at the edge of the forest. He seemed dark and scary. I figured he probably had a cauldron over that fire, bubbling with roots and bark and maybe a fresh lamb shank. (Was the nearby snow stained with blood?) I knew I should go meet him, but I was totally intimidated by this bulky character, even though I'd seen him scratching the back of one of his sheep with his long staff. 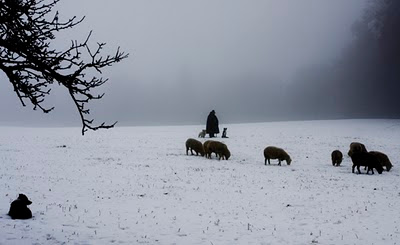 The next day, out for a walk, Marie-France and I stumbled upon him and his flock in a lower pasture. He was already talking with our neighbor Didier, who was clearly also fascinated with the herder.

We shook hands. His were as meaty and rough as you'd expect, but his face was friendly beneath his wide-brimmed hat and long hair. Crow's feet and chapped skin showed his long exposure to the weather. He smiled easily but his small eyes were alert, sizing us up. I told him my name, and my wife's, but he didn't offer his -- not uncommon in Switzerland.

He spoke with a flat South-of-France accent, where he'd grown up. I couldn't understand a word he said, but Marie-France explained to me later. His land was about 5 km. away down toward the lake in the village of Colombier, where he also had a flock of goats. For the last several weeks he'd been gradually leading his sheep through a succession of fields, asking each landowner in turn if he could pass through and let his flock graze. Most farmers said yes, but not all, he said.

His sheep were being raised for their meat, not their wool. He said he'd tried selling their wool once, but made less than what it cost to transport it.

He had a young border collie and some kind of terrier that stayed close to him. His one real working dog was a wonder to behold, always on guard watching the flock. When the shepherd gave him a command, he darted off and knew just what to do. "À gauche!" shouted the herder, and off the dog went around to the left.

There was also the big white dog that mingled with the flock. The sheep paid him no mind, and sometimes he dug at the ground just like them. His job, explained the herder, was to protect against wolves. Fortunately for the sheep, wolves are scarce in Switzerland. Because this guy was clearly a slacker, more interested in romping and tagging along with us, than playing dog in sheep's clothing.

While talking to the shepherd I leaned over to pet the younger border collie, and the shepherd tapped the dog away with a stick, sending it cowering behind his legs. "If he's getting petted, he's not working," said the shepherd. I guess I'm lucky he didn't give me a swat too.

Now a couple days later, the herder has moved his flock toward the village of Coffrane. He'd heard a particular farmer would be welcoming. But last night they still came back to bed down in the forest in front of our house. This morning before dawn, before I could see the sheep, I heard their bells and a dog bark. We'll miss them when they go. 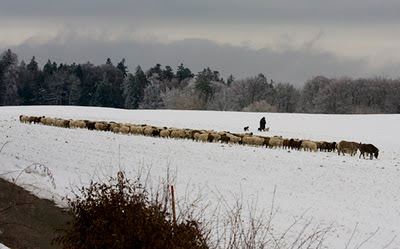