Yesterday, no lie, I ate an 8-course meal consisting entirely of pork preparations except for three token vegetable garnishes and dessert. Thank goodness for the non-swine dessert because I was sure they'd feed us pig knuckle ice cream.

Maïf and I had been invited by friends to a nearby village for this annual tradition. She had attended three times before and assured me it would be fun, not so much because of all the various pig meat dishes we'd be served, but because of the camaraderie. On such subjects, my wife is never wrong. 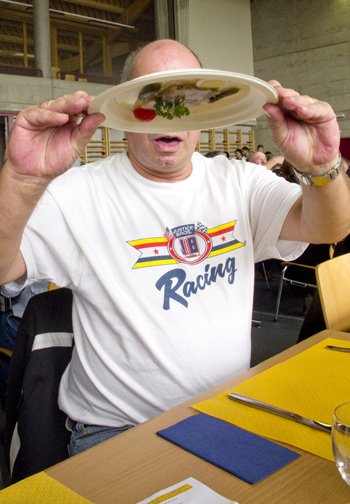 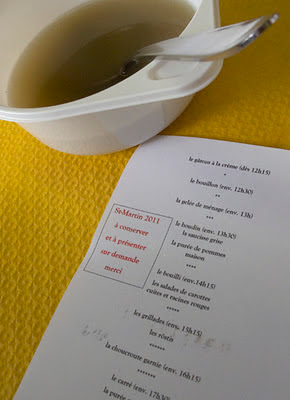 Long tables were set up in the village's unexpectedly modern community center, which seemed to normally serve as a basketball court with possibly the world's most bucolic panorama of a fairytale valley.

However, today, all eyes were on the menu. The Lord of the Flies came in many forms: as broth, as sausages (blood and "grey" -- don't ask), as upside-down-plate gellified terrine with pickles, as roasted filet. Token non-pork items also included Swiss traditional dishes of rosti (fried potatoes and onions), charcoute (sauerkraut), applesauce, carrots and beets. Erp. 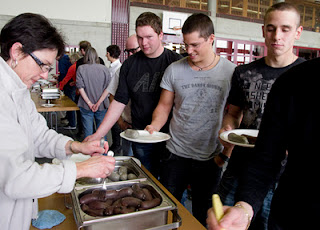 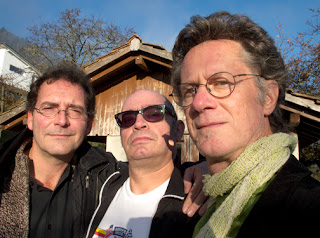 How was such gluttony possible? The meal lasted from 12:30 p.m. till 6:30.  We paced ourselves with walks outside to breathe in the crisp air and gorge ourselves on the green valley views. We aided digestion with plenty of the local pinot noir, and a dram of prune brandy which appeared later on.

Priceless I guess, but by the time Maïf and I had sprung for our two meals and a few half-bottles of local pinot noir for the table, we'd dropped more than US$170. Rumination upon this remuneration does not aid digestion.

But if I apply for Swiss citizenship one day, I'll definitely cite yesterday's dive off the deep end of the pork pool as proof of my devotion to Swissimilation.

My only complaint: Where was the bacon?
at 2:19 PM