I spent a couple fun days in Geneva last week. The Missus went to the salt mines nearby, while I strolled the busy streets, soaking up the big-city vibe and looking for ways to spend her earnings. The first day I cruised Rue du Marché, stopping in at my favorite knife store to salivate over the fine wares. I also got to watch the scammers out on the street cheat tourists out of their money with the bean-under-the-box trick. Darwin would find these displays of survival of the stupidest intriguing, I'm sure.

The next day I jumped on the tram going to Carouge, an outlying neighborhood the wife had been coaxing me to visit. The tram made its way south through the noisy, busy streets of downtown Geneva until crossing L'Arve river, and suddenly it felt like we were in a charming little French town. 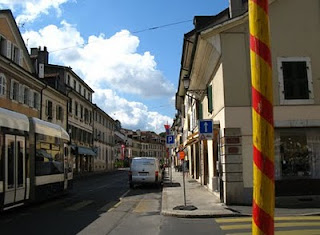 Just blocks away from the tall buildings and broad sidewalks full of people, here in Carouge, the narrow sidewalks in front of two-storey buildings were practically empty -- and inviting.

I found a frame shop with dozens of large, ornate, antique gold-leaf frames leaning against the walls like bored courtesans at a ball. The nice man told me that yes, he could probably find one to fit our big mirror at home, perhaps for less than 1,000 francs. He saw by my bulging eyes that our humble country cottage was not about to be blessed with any Rococo embellishments.

Nearby was a boutique filled with beautiful basketry and wood carvings -- all of it from Mauritius, where the owner's son had organized a group of local artisans.

After buying a half-bottle of Bordeaux and a sandwich in a little grocery store, I found a little park and installed myself on a bench to eat while making anthropological observations. 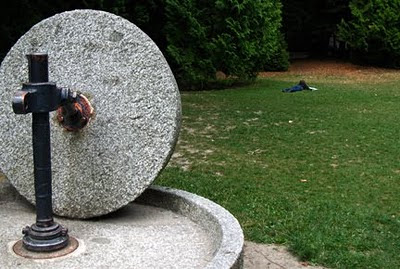 I will never forgive myself for not getting a photo of one amazing pair of ladies walking their tiny dogs together. One was a barrel-shaped old biddy dressed in a dark overcoat and clunky grandma shoes. Her perfect coiffure was a cottony little cloud. The other woman was quite possibly a hooker, a doll of a certain age with copper-colored hair, black fishnet stockings and scarf, stiletto Peter Pan boots and leopard-skin miniskirt. They walked and chatted like old friends while their miniature mutts trotted in front.

You two delightful ladies so suddenly gone, if you read this -- which is unlikely since probably no one else will -- look for me in the park so we can take some snaps suitable for framing. I'll be the rude guy pointing his long lens at you. So please don't call the cops -- at least till you hear me out.
at 6:21 PM