It's the last week of April, and here in the countryside above Neuchatel, the trees are budding, the tulips are open wide to the blue sky, we've sacrificed our winter parkas on the pyre of pagan spring, and I've just read that a woman died yesterday in an avalanche near Zermatt.

This news does not help my avalanche paranoia.

She was the 28th person in Switzerland to be buried alive by a plummeting wave of snow this winter. So far -- because tulips and shirt-sleeve weather in Neuchatel means nothing up in the Alps, which are still deep in snow, though I can't see them now from my house thanks to that huffing-puffing volcano in Iceland.

Great. I feel better already. Most skiers and hikers see an alpine mountainside covered in deep, fresh snow and wonder if they've died and gone to heaven (some shortly will). I see only a poised monster veiled in blinding beauty waiting to pounce.

For most of my 30 years living in Hawai‘i, I was paranoid of sharks. When swimming in the ocean, I had to force myself not to imagine a giant set of jaws lined with razor teeth whooshing up at me. I imagined having to swim to shore with no legs, or even worse, losing all my fingers and being unable to write my compelling book about my bestselling brush with death. Then I started scuba diving, and found that, once I saw the occasional shark -- and how uninterested he was in skinny little me -- I lost my fear. I even jumped at the chance to dive in a huge aquarium tank with 26 (very well-fed) sharks.

So now I've got to get to work on avalanches. I'm focusing on the thousands of people who frolic in the Alps each winter and suffer nothing worse than having their credit card account frozen at lethally expensive ski resorts. And I guess I've actually got to go up there myself. In the snow. Where it's really cold. Have I mentioned my fear of frostbite? 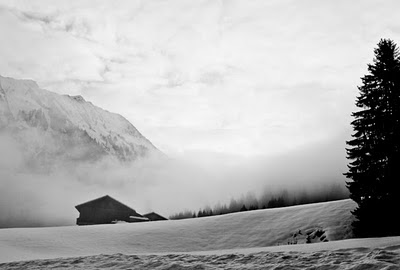 I just hope there are no sharks up there.