Recently, I took advantage of my brand-new train pass that allows me to go anywhere in Switzerland anytime by train, bus, tram, boat and probably magic carpet if I can find one. So I went to the Middle Ages.

In Luzern they were having a medieval fair last weekend. I've been a fan of The Middle Ages ever since I had a crush on the medieval lit professor at my university. I also have a teensy bit of a thing for beautifully crafted knives. The fair's brochure suggested there'd be blades aplenty, so I knew this was how to break in my new train pass.

Voilà, on Sunday morning, after a two-hour train ride, there I was on top of a grassy hill above Luzern, paying my 15 francs as a cold rain and grey sky added a certain Dark Ages faux-realism to the surroundings. This atmosphere was briefly interrupted by the gateway sentry, who wore on his belt not a sword but a walkie talkie with an ear piece. Once inside, I gazed upon a scene that wouldn't have looked much different in the 14th Century. People in soggy dress tramped on soggy ground among small wood and canvas shelters where craftsmen sold leatherwork, jewelry, knives, swords, armor and archery equipment. Roasting chunks of meat turned on a spit. Pink-faced young men wearing broad swords smoked cigarettes. The rain soon let up, but anyone wearing a cape soon had its bottom fringed with mud.

Most of us wore boring modern-day clothes, but a number of the tried-and-true were decked out with medieval robes, damsel dresses, chain mail, thick leather breastplates, and of course, wide belts hung with swords, daggers, and the most important utensil of the day, the drinking horn, whose most admirable feature was that you couldn't put it down until it was empty.

The merchants had all these accoutrements for sale. A couple of blacksmiths worked their bellows and pounded out red-hot knife blades. Their stalls were lined with handsome swords and daggers. One of these artisans, from the Czech Republic, was a true master, and it took all my restraint to keep from buying one of his fine 200-franc blades. (You Freudians can just zip it, OK?)

Fortunately, I was diverted by a trio of musicians playing period instruments and cracking jokes that almost sent people rolling in the mud. I even laughed, even though I don't speak a word of Swiss-German. (The only words I understood all day were, "Es ist ein Maus!" but don't worry, it was just a fluffy fake mouse given as a prize to a little boy who clearly would have preferred a sword.) 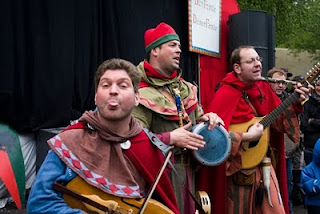 Later I ate a gristly, greasy pork and onion sandwich that required all of the tearing of pig flesh that I assume was de rigueur among medieval folk a-feasting, and could account for all the missing teeth you always see among the grubby peasants in medieval movies.

After a couple of hours slogging through puddles in wet feet, I retreated to the nice, dry 21-Century train, having successfully resisted buying that Czech dagger that I had absolutely no use for. But just seeing the gorgeously deadly instrument was a thrill. At American festivals you generally only have to resist buying cotton candy, not medieval weapons.

Next week there's another festival celebrating medieval weapons in the town of Morges, just a short train ride away. I bet that Czech guy will be there.
at 10:35 AM