Until two years ago, Loki the Magnificent had lived his entire life in Hawai'i. He was happy in his realm among the ferns. 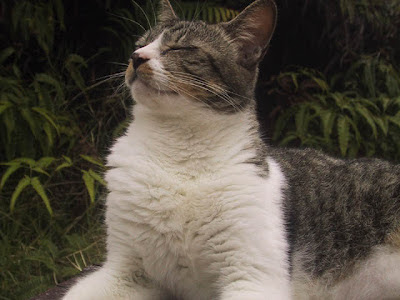 This is his second winter in Switzerland.

Among world expats with partners, there is usually the person who prompts the move, usually because of a job. If married, his or her partner is known somewhat ignominiously as the "trailing spouse." Loki is what you would call a trailing pet, though without any of the ignominiousnessness.

And yet, in some ways he is leading the way. In spite of the recent paw-numbing cold snap we've had here in Europe, this expat cat is adapting so well that I hoped he might be willing to share a few of his secrets for cozying up nicely to life on the other side of the planet in a place so alien that even the mice speak French.

No, I didn't interview him. He's a cat. Whirring tape recorders make him nervous, and if you try to take notes in front of him, he always swats at your pen. But, after 11 years of being brothers, we communicate pretty well.

Last winter here in the farmland above Neuchâtel, Loki peered out the door at the first snowfall apparently certain that Hell had indeed frozen over. This winter it's different. If the temp isn't too much below freezing, he likes to sleep outside, snuggled in the blanket of his windowsill basket. 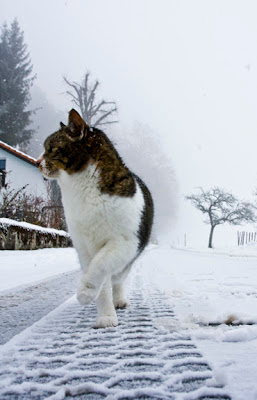 Clearly, the boy has something to teach the rest of us who are making a new life abroad. And it is this, sez Loki: Learn from the locals, and permit them to be intrigued by you as you're true to yourself. When it gets cold, eat more and wear a heavier coat. In summer, make friends with the cows, but don't let the dogs on your turf. And first and last, step into the adventure.
at 10:11 PM