When Soup Drowned the Savoyards

On December 12th 1602, which, with the old Julian calendar, was the longest night of the year, story has it that a woman who came to be known as Mère Royaume came to the walls of fortified Geneva town, like so many other citizens, to help the militia defend against an attempted sneak attack by French Savoyard mercenaries. She poured soup over the wall and killed one soldier, not because her soup was boiling or extremely bad-tasting, but because it was in a heavy iron cauldron. Needless to say, the Savoyards were eventually defeated.
Today Mère Royaume’s bull's-eye bonk on the noggin is celebrated in Geneva with  La Fete de l'Escalade, an annual two-day historical festival the weekend around December 12th. You can even dine at the Mère Royaume Restaurant. I haven’t tried their soup yet.
This year the weather was a balmy 45ish (F) with the setting sun replaced by the full moon.
The Grand Cortege on Sunday began at 5 p.m., led by a phalanx of helmeted pikemen. As they marched, the black smell of oiled torches passed with them. 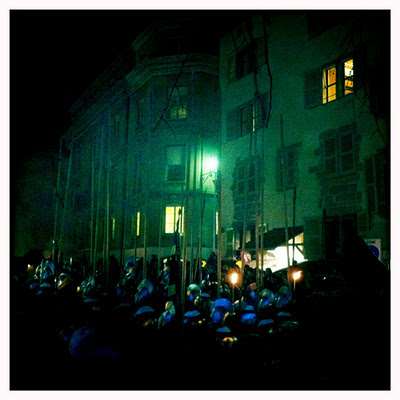 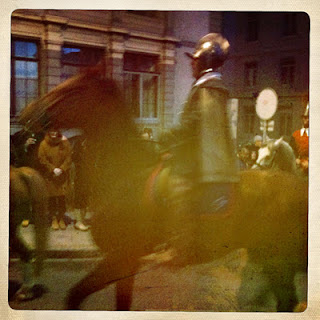 Then came armored cavalry, the horses wide-eyed, clattering on the cobblestones, but accustomed to the torches and rat-a-tat-tat of drums and shrill fifes.
Then came a few bemused scholars in black commencement robes, then gentlemen in sturdy leather jerkins with fine rapiers and daggers. Then country people and some sheep. Then a rumbling wagon draped with battle-scared flags – a white cross on a red field -- the Savoyard flag. The wagon was decorated with smudged breastplates and helmets, trophies of the vanguished.
Then came my favorite, the pooper scooper wagon, which was hauling a big old dirty barrel with a shovel-sized hole cut in the top. Intriguingly in this city seen as the center of global human rights, the shit wagon was led by a huge magnificent golden horse. Behind was a muscular, dignified man with the shovel. 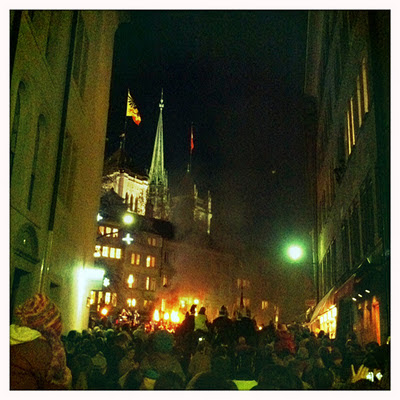 You could hear lots of Americans and Brits in the throngs of thousands. In Geneva, you often hear English around the city center, but tonight it seemed like an anglophone expat living-history outing. As the parade passed, a British couple in front of me were discussing her NGO.
It was a warm-hearted night made warmer with vin chaud, the yummy spiced red wine served hand-warming hot during l’Escalade from stands all around the medieval heart of Geneva. I also slurped up a cup of steaming soup while sitting on a bench at the top of an old defensive wall. If there had been Savoyard soldiers below, I wouldn’t have been able to do much damage. 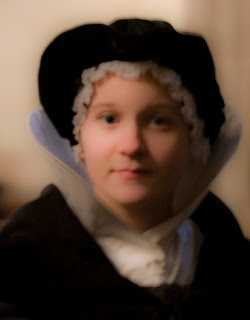 But no doubt Geneva has future Mères Royaumes waiting in the wings, should they be needed.
at 6:10 PM