Having arrived in CH the end of March, I'm learning that there are micro-seasons here in Suisse Romande. No sooner had I fallen utterly in love with the pure brilliant colors of the tulips standing tall and proud and brave in our and everyone's still-frigid spring gardens, than they all folded in upon themselves like dying ballerinas, leaving just sad, pale, spindly stalks.

However, this tragedy was quickly assuaged by the expansive fields of colza, whose brilliant yellow blossoms quilt the countryside in late spring. I'm almost surprised that the Swiss authorities have not banned roadside fields of colza because they are clearly a traffic hazard. When you round a curve and are greeting by the breath-taking sight of millions of bold yellow blossoms carving the countryside into giant pieces of yummy-looking cake, well, it's a wonder that there aren't piles of cars off the side of the road full of dead people whose last thought was that they'd just seen the Elysian Fields.

Colza is also known in English as rapeweed, though this unfortunate name has caused considerable efforts at rebranding. North Americans know the healthy cooking oil derived from the plant as CAnola oil. This is a rather acrobatic abbreviation of CANadian Oil Low Acid, which sounds about as appetizing as an artificial lubricant derived in undergraound labs high in the Northwest Territories.

As far as I've been able to determine, colza oil or whatever you want to call it, is valued for its "neutral" taste, which, to be honest, is not something I've ever really looked for in cooking. Plus, now that I live just north of the Alps, below which are Italy and Greece where they cook and reportedly bathe in the world's finest olive oils, extra-virgin and otherwise if you catch my drift, I don't see myself using a lot of colza. 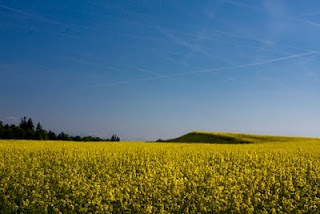 But I may buy it anyway just to do my small part in perpetuating these glorious buttery fields of tiny flowers.
at 12:06 PM