During a recent short visit to Vilnius, Lithuania, I did not taste the local wines because I'm suspicious of wines made from fruits other than grapes. I did taste 6 or 7 Lithuanian beers... Moving on, I bought a sample of three Lithuanian liquors. 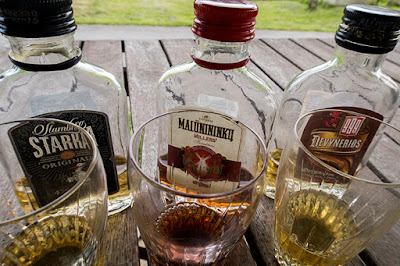 In the Vilnius airport on the way home, I asked the guy at Duty Free if he drank the liquors he was selling. He said yes, of course, without being condescending, and recommended this 3-pack of traditional Lithuanian liquors.

The packaging describes each liquor.

Starka "in the days of old, used to be made on the occasion of the birth of the first son." It's made from apple extracts, pear leaves and secret ingredients.

Malunininku "has a slightly burning, savory taste with a touch of rye-bread flavor." That's it almost exactly -- also a little sweet and thick.

Devynerios has secrets that "run back to the depths of ages." This elixir contains 17 ingredients, including bark and roots and probably magic spells. It's my favorite for now.

A scientifically conducted comparative tasting yesterday by three judges reached no common conclusions, yet remained civil. Two of us thought all three liquors were delicious. One of us didn't like Malunininku so much. One of us liked it the most. The three-pack costs €10 in Duty Free at the Vilnius airport. If you're going, pick me up one and I'll pay you back.