A Year in Switzerland

Wow, a year already since I kissed my Swiss bride at the Geneva airport and we began our new life here. Impossible. Inevitable.

Objective scientific analysis shows that the experience has been 97-percent perfect, admittedly due in part to newlywed bliss, but also thanks to the open arms of Suisse/Schweiz/Svizzera and most of all to the sheer classy quality of life here.

Much of the year has been full of less-than-romantic moments, including the present one where I stare at the pile of Swiss and American income tax forms, and consider upsetting the (Geneva-based) International Committee of the Red Cross by calling in an airstrike.

But guess what -- in spite of Switzerland's clichéd reputation as an anally nit-picky bureaucracy, my experiences here have been anything but.

Par exemple: Just yesterday I picked up my first-ever Swiss drivers license. When I approached the window and began unrolling a long, twisted, doughy French pretzel of a sentence which I hoped was suitably explaining that I was wondering if my drivers license for which I had completed and properly presented all the paperwork, and then paid the fee in a timely fashion at the automatic bill-paying machine at my bank where I now held my very own Swiss account, merci beaucoup -- before I could get much past, mes papiers, the lady on the other side of the glass interrupted me to say (in French), "Yes, you're the man from Hawai'i, right? I was just going to mail your license today. I'll get it." She had recognized my face.

This sort of treatment has been typical of my encounters with the Swiss. So don't complain to me about Swiss bureaucracy, or I'll demand your deposition in triplicate and bill you CHF80 for each copy.

Of course it always comes with a price. My shiny new driver's license cost the equivalent of about US$120. My annual residency permit, which I got renewed last week, cost about the same. Switzerland is expensive -- that's one cliché that rings as clear as the town church bells. A good restaurant meal for two costs almost as much as my monthly $200 train pass. You can even spend that much on a couple of horse meat steaks. (So much for "civilized.") 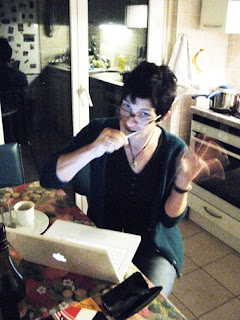 Nevertheless, I admit that I'm predisposed to be happy here. It starts with my chérie.

Then there's the fact that being an "expat" has always been seductive to me. I loved living in Paris for six months. Some Americans would say my 32 years in Hawai'i almost qualify as foreign-living.

What is it about being a foreigner living in a different country that's so appealing to some of us? In a way I've spent my whole life as an expat. My dad was a career U.S. Army officer, which meant we moved every few years to a new state. The French word makes sense to me: etranger, almost like "stranger." I like being a stranger.

Switzerland is full of other etrangers -- about 25% of the people who live here in CH come from somewhere else. I prefer living where there are lots of international multi-culti nuances. On any given day in my city, Neuchâtel, I might hear Italian, Russian, Portuguese, German, English, Arabic and one or two other languages.

And it's language that constantly reminds me that I'm still very much a foreigner. I'm taking French twice a week, but my progress has been slow. It's a distasteful barrier for a talkative person who is obsessively nosy about this new place he lives and wants to ask everyone about everything, but fears to do so because he can't understand much of what they tell him.

Yet, the truth is that this foreign country seems like home in some weird atavistic way. My family name "Harby" comes from Old Norse, and there's a village in England named Harby. Maybe I had other ancient Celtic ancestors who migrated down here to the valleys around the Jura mountains or the Alps. Maybe one of their sons is back.
at 6:11 PM