When you sign up to be an expat, one of the things they forget to tell you is that you will be required to think simultaneously in not only more than one language, but more than one currency. 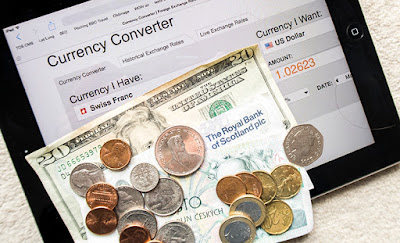 My Swiss wife and I live in Switzerland, but earn money both here and in the U.S, my home country. We have Swiss and American bank accounts and credit cards. Sometimes we need to move money one way or the other. We often wonder if we’re being idiot-savants in our multi-currency choices, or just idiots.

In January 2015, that got instantly more complicated when, with no warning, the Swiss National Bank ungallantly pulled out of its promise to continue to couple the voluptuous Swiss franc with the not-very-sexy-anymore euro. The bank did this, its sages said, because it was costing the Swiss government ga-jillion francs per month to cap the rate of exchange, and "that just wasn't turning us on."

However, those people who work in Switzerland but live in one of its surrounding Eurozone countries were very turned on. On the day of the announced coinus interruptus, they got an instant de facto 20-percent paycheck raise. Likewise true for Swiss residents living close to those countries, because everything from muesli to Mercedes was suddenly for sale across the border at an automatic 20-percent discount.

The other day in Geneva I went to a multimedia store’s camera department to compare prices. I was the only customer. The clerk was smiling serenely, perhaps enjoying having no customers to bother with even while he continued to draw his Swiss salary, which he would spend in France, 15 minutes away, where his former customers were now shopping.

Most Swiss companies are not smiling. They feel jilted by the SNB decision. Swiss ski resorts began receiving cancellations faster than you can say "French Alps." Some Swiss businesses exporting products to Eurozone clients have already folded. Only time will tell how much this will hurt the sexy Swiss watch industry, which is normally as immune to market fluctuations as penthouse call girls.

All this decoupling has raised questions for my wife and me, even though our discretionary funds are usually limited to long weekends in nearby Eurogenous zones like Paris or Prague. Should we spend our American money only in the U.S., and use our Swiss income here in Switzerland? What about when we travel in Euroland? When should we use our American credit card? Or is it altogether more fiscally responsible to simply steal old ladies' purses?

We sought advice from our American accountant and a Swiss financial wizard. They both said the old ladies’ purses option would yield short-term gains outweighed by long-term risk. Instead they advised: Spend money from your American accounts only there. Spend Swiss money here in Europe. Avoid transferring U.S. dollars to Switzerland.

Clearly brilliant advice. Which we pretty much ignore. Because if you need the American credit card to buy a fine Swiss Pinot Noir in Geneva, you just do it.

~ reprinted and revised from my article in Global Connection magazine
at 2:24 PM